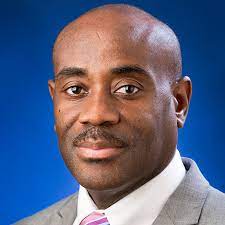 Lance Lyttle is the Managing Director for Seattle-Tacoma International Airport. Before joining Port of Seattle, Lance was Chief Operating Officer for Houston’s three airports and Assistant General Manager at Hartsfield Jackson. A growth-oriented executive, he has led strategic development efforts of $5B at Houston airports, and played a key role in the $6B development in Atlanta. Currently, he leads a multibillion-dollar terminal revitalization program including an international arrivals facility, renovating the north and south satellites, and upgrading the baggage handling system. In 2017, he was elected to the Board of
Directors of Airports Council International. Lance also serves on the Board of Directors for the International Association of Airport Executives and is the Chairperson Federal Affair for the American Association of Airport Executives. Lance holds a B.Sc. in Physics and Computer Science and a M.Sc. in Management Information Systems.